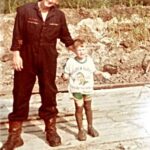 My introduction to oil & gas came at a very early age, as my dad has worked on rigs since he was a teenager.  Back then, there were not many options outside of farming and the oilfield in Crowley, Louisiana.  That said, I had other plans, but in the end, those plans and decisions that I made led me to a career in the oil & gas industry.

Following four years in the U.S. Air Force and four years in college, I entered the business world with a Degree in Finance and the desire to be a financial advisor.  However, six months after landing a job with a large insurance and financial company, I realized that phonebook cold calling and 100% commission were not for me, so I began searching for something else that would afford me the ability to support my family.  Well, living back in South Louisiana, the obvious option was the oilfield, so my dad secured me a job on the completions side of the industry.

While offshore, I kept seeing this young guy in a baby blue shirt that always appeared clean, so one day I approached him to see what his deal was.  Turns out, he was the completion fluids engineer for Mi-Swaco.  I picked his brain about the job for the next three weeks and decided that this is what I wanted to do.  During my next days off, I did some investigating and found out that my brother’s father-in-law was the engineering manager for Baker Hughes Drilling Fluids…I was in mud school a month later.

I worked for Baker Hughes for the next two and half years when my resume ended up at Fluids Management (FMI).  After a few weeks of back and forth, I decided to interview and was ultimately hired in the summer of 2008.  That was the best decision of my life.  From day one, I knew that this was a place where I could make a career of it.  The people I met that day were amazing; many of which are still with the company today.

Immediately, I engineering sent me to one of our two offshore jobs, which was kind of upsetting because I was tired of working offshore.  This assignment ended up being a blessing in disguise, though, as I was able to survive the massive cutback of 2009 because we did not have many offshore mud engineers.  Later that summer when drilling slowed, Nate Castaneda and I processed mud at our Grandview facility; no doubt we were both willing to do anything to keep our job because we believed in this company.  As things picked back up, I landed on the EOG account working for Nick Landwermeyer.  I learned a lot from Nick and was eventually promoted to his field supervisor.

Within a year, Nick was grooming me to take his position in Fort Worth, Texas as Account Manager for the Barnett Shale.  It took a lot of convincing to get my wife to move to Texas.  Then, three weeks before closing on our house, I was informed that I was needed in Pittsburgh, Pennsylvania.  Yeah, Okay!  My wife was not going to be happy with this news.  In fact, I was not that excited either because my mental picture of Pittsburgh was from The Deer Hunter.  Furthermore, I always hated the Steelers, the Pirates were terrible, I did not like hockey, and most importantly, I do not like cold weather.  However, as I mentioned before, I was willing to do pretty much anything for this company.  So, in 2011 I moved my wife, 11-year-old daughter, and 5-year-old son from south of Interstate 10 to a place that gets over 25 inches of snowfall each year.

This was a hectic time in the Northeast as we had 50 rigs, a temporary warehouse, and were going through a buyout (CES) and a name change.  For my first six months, I worked as Hugh Irwin’s assistant engineering manager and trained under Lonnie Broussard to be an account manager.  Once I had my first account, I felt like I reached a major milestone in my career.  Over the next few years, I worked side by side with James Strickland as an account manager.  We were also salesmen, tech support, field supervisors, and whatever else we needed to be.  We had some long days and nights.  But man!  It was worth every minute.

The team around me includes Justin Parsons, Titus Robinson, Alex Turcotte, Ken Arp, Josh Hendrickson, Dalton Smith & crew, Derrick Weitoish & crew, all of our mud engineers, and other support staff to make this possible, and I could not do this without them.  People like the ones named and everyone else in this company make us what we are – THE GREATEST MUD COMPANY IN THE WORLD!

As a young man, I did not see myself with a career in oil & gas, but it is what I am.  Fate or destiny, I was going to end up here one way or the other.

BTW, ten years later and I still do not like January and February — March, April, and May some years.