Torque and drag limit rate of penetration and compromise directional control. From our signature ENERLUBE lubricant to our latest options, BRINEX or ENERLUBE LITE, we offer high performance, proven solutions to minimize torque and rag.

Effective lubricants maximize the power going to the bit and lower the overall stress on the drill string. This maximizes rates of penetration while extending the life of the drill pipe. In many cases, lubricant additives feature surfactant blends designed to adhere to metal surfaces. There are also options, such as beads, which may act as “ball bearings” between the pipe and casing or formation. AES Drilling Fluids offers a wide variety of options and aids customers in choosing the most practical and economical solution for their application.

CLICK TO LISTEN TO EPISODE 15 FOR MORE ON LUBRICANTS

Many lubricants introduce complex interactions with drilling fluids. This can include alterations to critical drilling fluid properties, such as rheology and fluid loss, as well as catastrophic incompatibility through cheesing and greasing (top right images). Prior to the introduction of a lubricant, extensive testing is performed to:

AES Drilling Fluids offers only proven, effective options while continually evaluating new chemistries for even better performance. There are thousands of additives available as lubricants, although performance must be defined by all of the criteria above to avoid serious issues at the rigsite. For example, many conventional lubricants are incompatible with direct emulsion systems. Their addition can result in catastrophic phase separation of the fluid. Through our extensive validation process, we developed ENERLUBE LITE to prevent this separation. In the images on the lower right, conventional direct emulsion (EnerLITE) is shown without lubricant (left), with a conventional lubricant (center), and with ENERLUBE LITE (right). The lack of separation insures fluids perform as expected while providing critical lubricity enhancement. 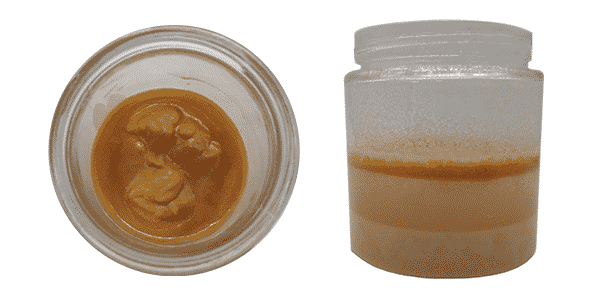 Cheesing and greasing of an incompatible lubricant

In most drilling fluid labs, lubricity is measured by converting the current applied to a motor rotating against a stationary object to a torque value. Untreated and treated fluids are compared for a relative torque reduction.

The most common measurement device is the EP lubricity meter where a block is pressed against a rotating ring assembly. The assembly is immersed in fluid for the reading. An example of output data is shown to the right. In this example, various concentrations of various products are compared to show both performance in overall torque reduction and the optimal concentration for best performance.

Another measurement device, the lubricity evaluation monitor (LEM) rotates a spindle against a sample of casing or sandstone inside a cell where drilling fluid is circulated.

There are a number of other devices, but as they become more complex to mimic downhole conditions the tests become increasingly expensive. No matter the testing methods, laboratory data must ultimately be evaluated in the field by monitoring actual torque and drag reduction versus an untreated fluid. 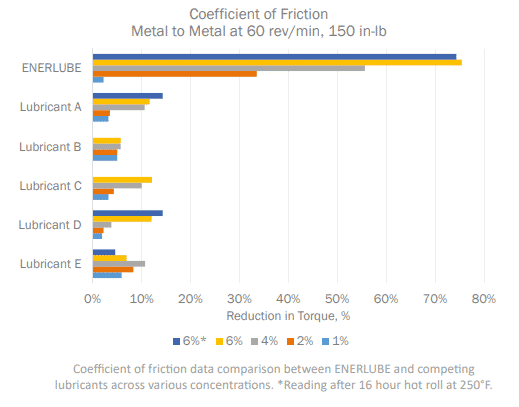 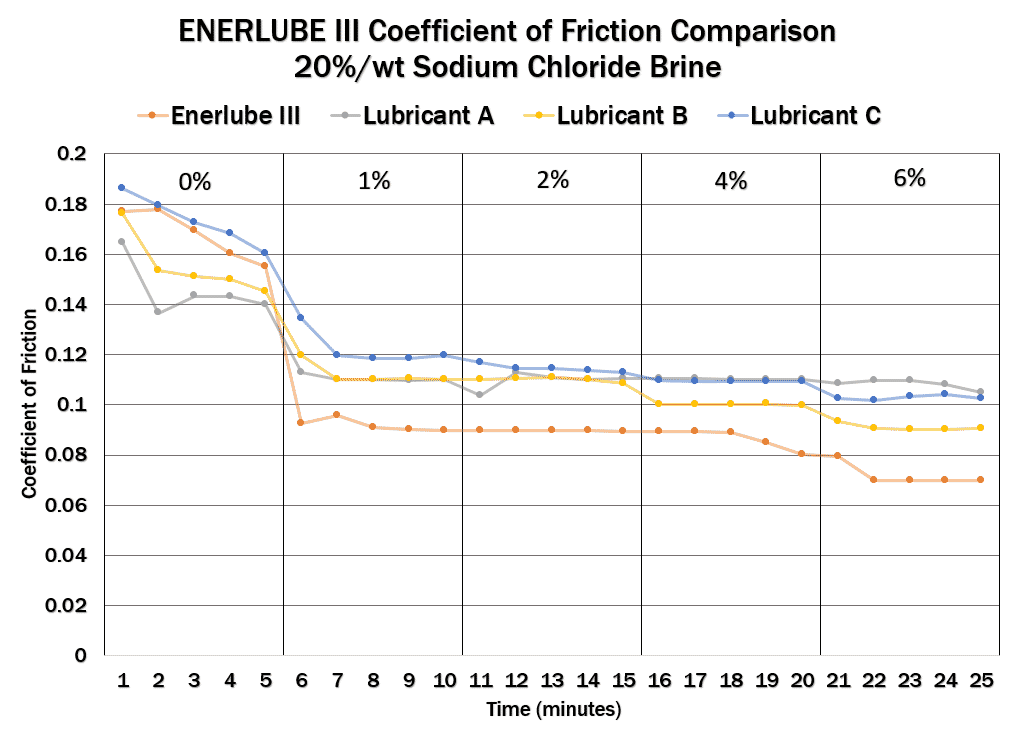